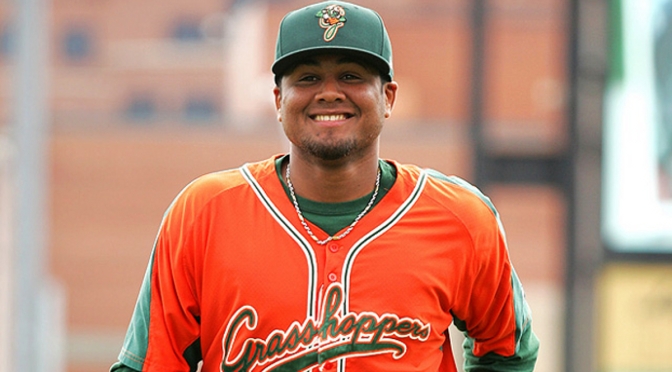 Entering his seventh season of professional baseball, after signing with the Marlins in 2008 as a non-drafted free agent at the age of 17, the Dominican Republic’s Felix Munoz finally has a chance to legitimize himself as a top prospect in the Miami Marlins farm system. Munoz should join the ranks of Justin Nicolino, Tyler Kolek, J.T. Realmuto and several others who are projected to be on the fast track to seeing their pictures in a glossy program at Marlins Park.

Docketed by many analysts as a “Sleeper” prospect for the past two seasons, Munoz has given hope to the Miami Marlins organization – along with all the Felix Munoz fans of the world – who had been waiting for his power tools to develop at the plate. Playing in 126 games during the 2014 Season at Single-A Greensboro, more games than he had in the past two seasons combined, he put together an impressive campaign with a slash line of .300/.368/.476 in 560 plate appearances with 16 home-runs. Despite playing in a minor league ballpark that scouts believe to be a “cracker jack box,” Munoz sprayed home runs to all fields. All the while, he showed an advanced level of comfort at the plate drawing 57 walks and only 79 strikeouts and driving the ball for a Dwayne “The Rock” Johnson eyebrow-raising .326 BABIP.

This impressive showing makes his numbers comparable to Top Positional Prospects in the Marlins organization in that same early-20’s age range like Brian Anderson and Austin Dean, who both produced almost parallel slash lines at Single-A Greensboro:

Unfortunately, what you do not see in his stat line are the negative intangibles. Standing at 6’2” 180 lbs. it’s hard for Felix to find a home at his listed positions of first base and left field. His lack of speed, proven by swiping just one stolen base over his last four minor league seasons, hurts his chances to be projected as an everyday left fielder. Meanwhile, a proven year-to-year track record of power production is needed to be a lock at first base. These two aspects of his game have kept him off the Miami Marlins Top 20 prospects board since signing in 2008.

Munoz will turn the all-important 23 years old in 2015, and with his notable surge of power at the plate over the past two seasons, he will be out to prove he can become an everyday regular. With High-A Jupiter Hammerheads, he will take the opportunity to become that left-handed power-hitting, homegrown product the Marlins have been searching for. Felix Munoz’s recent performance almost challenges everyone to not have him on their watch list’s for the upcoming 2015 season.

*Note: Please check out the original article posted at (http://www.fishstripes.com/2015/2/19/8042769/miami-marlins-prospects-felix-munoz-2015-season-overshadowed)