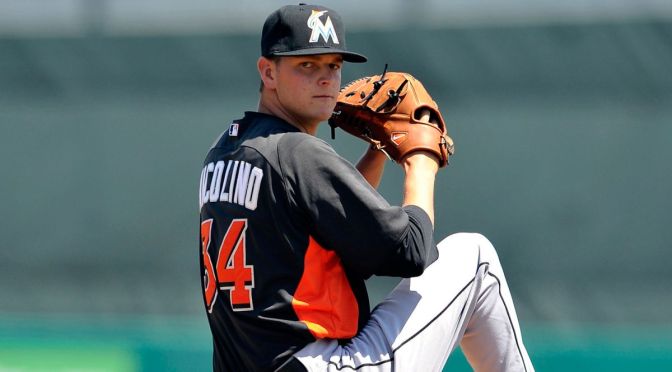 If everything evolves as predicted, the future for Justin Nicolino, one of the most decorated Minor League pitchers, looks bright. However, where does he fit in a talented Miami Marlins rotation that will feature a dominant Top 3 with the return of Jose Fernandez mid-season from Tommy John surgery to join Mat Latos and Henderson Alvarez?

Rated as the Miami Marlins organization’s  #2 prospect by Baseballamerica.com, there’s hope within the front office that we will see the Marlins most coveted left-handed pitching prospect wearing the vibrant big league uniforms in 2015. Having recently traded Andrew Heaney to the Angels and the 2012 Mega Deal’s Anthony DeSclafani to the Reds for Mat Latos, the organization has slotted Nicolino as “The Next Man Up” if in need of mid-season help. The likelihood that he breaks camp in the Marlins big league rotation is slim, even though the need for a left-handed starter in the rotation is strong. The Marlins are hoping Brad Hand can land that job coming out of spring training, even though the organization believes Nicolino is the better option. This suggests that he is more likely to debut after the Super 2 Deadline in July. Alternatively, the Marlins may wait to bring him up late in the season, hoping he will make a 2003 Dontrelle Willis like impact, after some further fine tuning at either Double-A Jacksonville or Triple-A New Orleans.

Labeled by scouts as a Command & Control style pitcher, he registered an impressive BB/9 rate of 1.06 in 2014. This is attributed to his tall frame, high baseball IQ and a deceptive overhand throwing motion that creates a downward plane on his pitches, allowing him to keep his strikes low in the zone, and generating weak contact. His .03% HR/FB ratio in 2014 is evidence of this. This type of pitchability allows his arsenal of pitches to play up at the next level. However, he carries a mediocre Fastball that clocks in around 89-92 MPHs and a below-average Curveball that has been labeled more of a Slurve at 77-80 MPHs. The one pitch in his arsenal that is already tailor-made for the big leagues is his change-up. It generates excellent late fade, and paired with his deceptive arm speed, it has become his go to swing and miss option when ahead in the count on hitters.

Despite being equipped with all these tools, there are concerns he may not reach his maximum potential. Seen by his dramatic regression in his K/BB rate from 24% in Single-A, to 11.8% after being promoted to Double-A Jacksonville in 2013. This appears to reflect his inability at this point to develop tighter spin on his Curveball. This is needed to improve its consistency and late break, adding that “whiff” factor needed for him to be successful not only at the next level, but at the Major League level. In addition, scouts are worried how his arm will hold up as he takes on more innings. The aggressive manner he throws across his body leads to a lot of arm side run and deception on his Fastball, but scouts are worried he could develop serious shoulder issues.

With growth and development we all hope he can astound at the Major League level like he has at the Minor League level. It will be difficult to surpass his current awards of being the 2014 Minor League Pitcher of the Year and finishing 2014 Ranked #1 as the Top-Control Starter in the Minor Leagues. There is little reason to think he couldn’t become a future Ace, or even a strong #2 in the rotation behind Jose Fernandez. For now though, don’t expect to see him on the opening day roster unless the Marlins suffer injuries during spring training, and without a consistent “whiff” factor present in his Curveball he projects to me, at best a #4 in the Marlins Rotation.