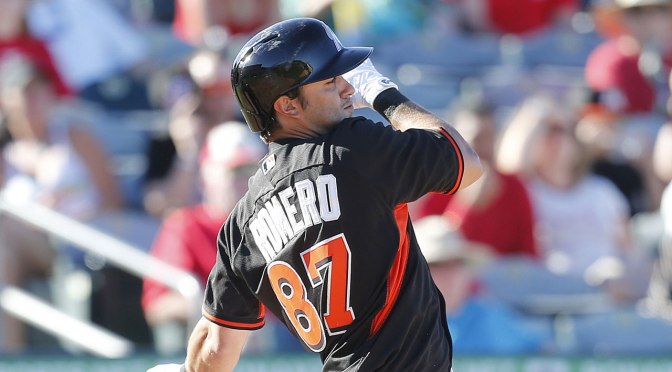 In 2014 the Miami Marlins struggled to find an everyday second baseman. The position became a revolving door for the entire 2014 campaign after Rafael Furcal, who signed a one-year deal in the off-season, went down in Spring Training with a hamstring injury that he would never fully recover from. He played in only eight games, causing the Marlins to start six different players at second base over the course of the season. Enrique Hernandez, Ed Lucas, Jeff Baker, Derek Dietrich,Donovan Solano and Jordany Valdespin were all part of that revolving door. None of the six players slotting in at second base in 2014 were able to make a lasting impression on the Marlins front office, forcing the organization to move in a different direction for the 2015 season.

After getting a look at all their internal candidates in 2014, the Marlins moved to overhaul at second base this off-season. In a flurry of moves this winter the Marlins were able to do just that. After the Texas Rangers claimed Ed Lucas off waivers, the Marlins landed Dee Gordon in a trade with the Dodgers to solidify second base for the upcoming 2015 season. This trade included Marlins 2014 mid-season acquisition from the Houston Astros, utility prospect Enrique Hernandez. This series of off-season moves not only improved the black hole that was second base last season, but also changed the whole dynamic of the offensive line-up as well as the defense up the middle. The dynamic has been on display this spring with Dee Gordon leading off at the top of the line-up,Christian Yelich moving him over and Giancarlo Stanton driving him home.

With all that being said though, the Marlins might have finally found a second basemen that will be able hold down the position for more than 100 games a season, something they haven’t had since trading Omar Infante to the Detroit Tigers in 2012. If Dee Gordon does go down with an injury, or he reverts back to the slump he struggled through the second half of the season last year, then utility entrepreneur Donovan Solano will be there to pick up the pieces – with Derek Dietrich and Jordany Valdespin waiting in the wings at Triple-A New Orleans and Jeff Baker making the occasionally celebrity appearance.

Even if most of the Marlins second base depth already has major league experience, there are still two highly touted young players that add promising depth in the Marlins minor league system.

Drafted by the Marlins in the third round of the 2012 draft and ranked this season by MLB.com as the Miami Marlins #5 Prospect , this scrappy-aggressive 21 year-old second basemen who stands at 5’10″ 190 lbs., has been eating up pitchers early-contact fastballs through the minor league system.  His success has led him to High-A Jupiter. Romero doesn’t wait for the game to come to him; he brings his energy and excitement to the game. His aggressive approach at the plate, and effortless arm strength from second and strong hands could translate into increased power numbers as he matures. A majority of Avery’s home runs came in 2014 when he hit five of his 11 minor league career home runs  – a high percentage of them to his pull side of the field. We are going to have to wait and assess how the power comes along and contributes to his future slash statistics.

He paired his steady build up in maturity and earnest efforts to improve his footwork in the infield, with the tremendous raise in production on the offensive side of the ball this spring – hitting a blast over the left field wall. He is a remarkable talent to keep an eye on at the minor league level heading into the 2015 season – especially after turning some heads with his improved approach to the game this spring.

As I stated in my article, Miami Marlins 2014 Draft Review: Mason Davis, Mason was drafted by the Marlins in the 19th round of the 2014 MLB Amateur draft. The 22 year-old,  5’9″ 175 lbs. switch-hitting infielder, who models his game after All-Star shortstop Jimmy Rollins,  batted a collegiate career high of .310 at the plate with a career best 27 stolen bases his junior season at the Citadel. After being drafted by the Marlins, Davis hit the ground running when sent to play for the minor league affiliate, the Batavia Muckdogs in the NY-Penn league. Continuing that hot collegiate swing, he pounded out a .319 average at the plate with a .369 BABIP to go along with nine swiped bags over the course of 248 plate-appearances. That was impressive enough to be named to the NY-Penn League All-Star Game in Brooklyn, NY.

Towards the end of his first season of professional ball, Davis was promoted to Low-A Greensboro – a team in a heated playoff race in the South Atlantic League. He gained invaluable experience as part of this successful Grasshoppers team. Seeing time at both second base and in the outfield, he was able to produce a minimum sample-sized slash line of .259/.355/.333 in 31 plate appearances. This is a line he will be determined to improve upon when he steps up to the plate again in 2015.

Other Notable Second Basemen to Watch

Iramis Olivencia/5-foot-9 180lbs./Drafted by the Miami Marlins in 2013 (8th round) out of Arlington County Day School, FL.

Note: Even though mlbpipeline.com’s Miami Marlins #21 prospect J.T Riddle is listed primarily as a second basemen, the Marlins have played him consistently at either third base or short-stop throughout his minor league career. He is not forgotten and will be highlighted when I talk about the Marlins minor depth at either of those positions.