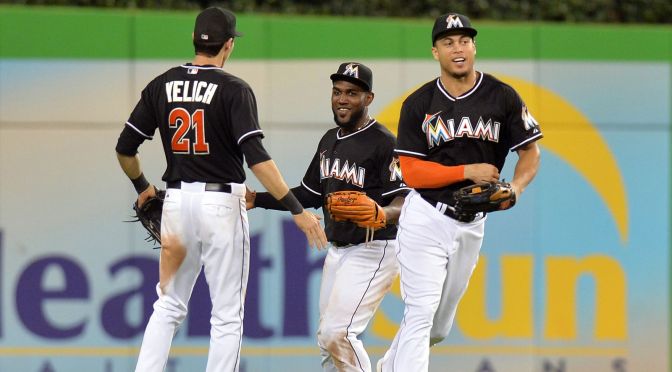 ere is no doubt that with an outfield staffed by Christian Yelich,Marcell Ozuna and Giancarlo Stanton, the Marlins are set for the future, especially after signing Yelich and Stanton to long term extensions this off-season. These three players have become the cornerstones to turning around the Miami Marlins franchise, as well as becoming the best young outfield trio in the Major Leagues.

Stanton provides the power, Yelich the average, and Ozuna provides range in the outfield as well as a little bit of both power and the ability to hit for average at the plate. If that isn’t enough to get you excited about the Marlins outfield depth, then the news of the Marlins adding free agents Ichiro Suzuki and Don Kelly this off-season had to help get you to that climatic state. Just to know that when one of the three amigos in the outfield needs a day off, the Marlins can look to the wildly experienced veterans Ichiro and Kelly off the bench this season.

Even though the Marlins’ future outfield already looks to be set in place, there are many other capable candidates in the Marlins minor league system buying time until their name is heard over the loud speaker at Marlins Park. At Triple-A New Orleans, outfielders Brady Shoemaker, Austin Wates andCole Gillespie are all waiting in the wings ready to perform should injury occur at the Major League level. Most are classified as Four-A players for the most part (not quite major league caliber, but have proven they are capable of hanging with Triple-A level caliber players).

When you start looking deeper into the Marlins farm system, though, there is a surplus of outfield talent. Not the kind of talent you will find at the Triple-A level, that kind of four-A talent, but true prospect talent that has the Marlins’ front office and General Manager Dan Jennings drooling over how bright the future seems to be. So without further-or-do, here are the Best of the Rest in the Marlins minor league system.

After getting off to a slow start in his first season of professional ball, the Miami Marlins’ 4th round draft pick in 2012, Austin Dean, finds himself at the top of the list for Best of the Rest – based on his consistency and high baseball IQ. He showcased this talent in his first full season of professional ball in 2013. Playing with the Batavia Muckdogs in the New-York Penn League, he registered a .335 BABIP in 231 plate appearances with an aggressive approach at the plate that yielded him 17 walks to 47 strikeouts. It’s that BABIP consistency though that keeps him at the top of this list, as evidenced in his statistics at Low-A Greensboro below:

It’s clear to everyone in the organization that Dean, standing at 6″1’ 190 lbs. can flat out hit the baseball and track down fly balls in the outfield. Even if his arm doesn’t blow anyone away, and his speed is average at best for the outfield position, Dean has the kind of raw line drive power to be successful at the big league level. He has a swing that almost mirrors the same successful plate statistics seen in Miami Marlins top Prospect J.T Realmuto. Nothing flashy and jaw dropping, but enough raw power to consistently find the gaps that earn extra bases at the big league level.

The key element to watch in Austin Dean’s game this year is to see if he can bring down his strikeout percentage at the plate – something I hinted at above. In 2013 Dean had a 20.3% strikeout rate at the plate, but brought it down to a respectable 16.0% at the end of his 2014 season with the Greensboro Grasshoppers. If he hopes to make the Miami Marlins big league roster in the future, he will need to continue to work on his craft at the plate – becoming more of a complete hitter by drawing more works while waiting on more hit-able pitches. None the less, Austin Dean is a player on the rise in the Marlins minor league, and is the closest prospect, at the age of 23, to being major league ready. He starts this season with the Marlins High-A affiliate Jupiter Hammerheads.

After signing with the Miami Marlins in 2013 as a free agent out of Bani, Dominican Republic, the left-handed, power hitting right fielder Isael Soto, who stands at 6″0’ 195 lbs., made a name for himself in a big way in his first full season of pro ball in 2014. Finishing second in the Gulf Coast League with seven home runs and registering .298 BABIP in 199 plate appearances as shown in his stats below:

Even if his stature and statistical numbers don’t jump off the page at you, they will soon. His short compact swing at the plate helps to generate a steamboat of power from his lower and upper halves which will lead to bigger power numbers down the line. Like every young hitter, Soto still has to continue to polish his aggressive approach at the plate that tends to lead to more swing-and-misses at times than solid contact. Soto also doesn’t run like a deer in the outfield or on the base path. This makes him an average minor league outfielder and more of a project than a prospect at this point in his minor league career. Ranked as the Miami Marlins #9 organizational prospect at the age of 18 years-old, Soto will look to continue his development at the plate, working on plate discipline and pitch selection in hopes of smashing the ball in a hitters ball park this season at Low-A Greensboro.

If Soto can put up the kind of power numbers the Miami Marlins front office thinks he can, there is a good chance you could see him climb up the ranks as high as Double-A Jacksonville. Of course that will all depend on how Soto fairs against Low-A pitchers. With one full season under his belt though, the sky is the limit for Soto in the Marlins minor league and he should be on every Fish fans prospects to watch board this season.

Other notable outfielders to watch:

Zach Sullivan/6-foot-3 187 lbs./Drafted by the Miami Marlins in the 2014 MLB Amateur Draft (14th round) out of Corning-Painted Post East HS in Corning, NY.

Note: This is in no way the finally prospect list for the Best of the Rest on the Marlins minor league depth chart. Pt. II will break down the rest of the Marlins outfield depth, while outlining some possible super utility prospects in the works down on the farm.