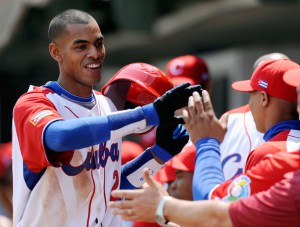 Hector Olivera, a nearly 30-year-old infield prospect from Cuba, was granted free agent status by Major League Baseball last Friday and expects to complete a deal with a team soon.

Teams such as the Atlanta Braves, Los Angeles Dodgers, Miami Marlins, New Oakland Athletics, San Diego Padres and San Francisco Giants love Olivera because of his ability to play second or third base. The biggest reason for their optimism is his bat, however. Scouts have projected Olivera’s ceiling for this season at 15-20 long balls and around 75 runs batted in. Olivera wants to play for a team on which he could be a middle-of-the-order guy in 2015.

Two things that might prevent him from getting the maximum contract are his age and past health concerns. While in Cuba, he had issues with a blood disorder. Jeff Passan of Yahoo…