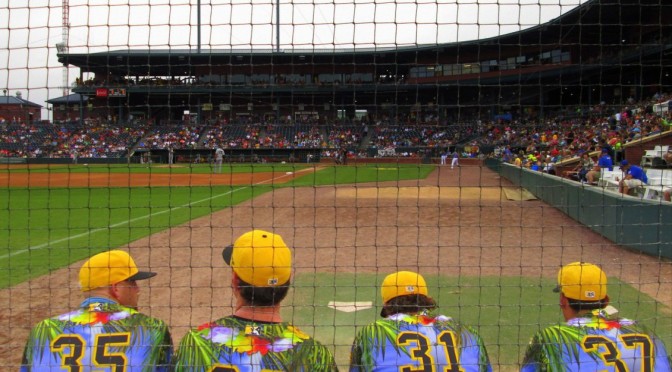 It’s no secret that the Miami Marlins bullpen has struggled to hold down leads for the Fish this season, contributing to 4 of the Marlins 14 losses, and is armed with just three relievers with a FIP below 3.00. As of this moment, the only bright spots in the Marlins major league pen are A.J. Ramos, Sam Dyson and Nick Masset. The brightest spot of them all so far, is of course, A.J. Ramos. He has thrown well so far posting a 1.65 FIP while stranding 84.6% of runners on base in 15 innings pitched, continuing to pound the strike zone with his three main pitches – Fastball, Slider and Change-Up. He has also brought back his Cutter, which hasn’t been seen in his repertoire since 2012. If Steve Cishek continues to struggle in the closer role, look for Ramos to have his name called again this season to step up and close out wins for the Marlins.

With that said, the Fish have built their major league bullpen around their farm system since the disastrous season in 2012, which leaves us scouring the Miami Marlins minor league farm system in search of the prospect with the “Next man up mentality”.

Before diving into the hidden gems in the lower levels of the Marlins farm system, it’s important to note that names like Carter Capps, Matt Ramsey and Andre Rienzo are all listed in the bullpen for Triple-A New Orleans. These are the four-A bullpen guys for the Marlins that add quick fill in value if someone goes down in the major league pen. At Double-A Jacksonville though, the Best of the Rest really start to shine – as we look at the Best reliever prospects pitching in the Marlins minor league system in 2015.

Almost a complete unknown in the Marlins baseball community, Logan stands to make a name for himself this season. Drafted in the 2012 MLB draft (13th round) out of Eastern Oklahoma State Junior College, Logan – standing at 6’1 225 lbs. – dominated at the junior college ranks, posting a 11-2 record as a starter with a 1.55 earned run average and 124 strikeouts in 93 innings pitch. These statistics had him set to be the ace at Wichita State the following season, had the Marlins not drafted him that year.

In his first season of professional ball Logan seemed to pick up right where he left off in college – going 1-2 (W/L) with a 2.56 FIP and 29 strike outs in 31 innings pitched as a starter for the Batavia Muckdogs. Unfortunately though, things fell apart for Logan in his first full season of pro ball in 2013 as made the transition from starter to reliever at Low-A Greensboro. He finished that season with a 4.61 FIP – with opposing hitters registering a .333 BABIP against him at the plate. Control seemed to be the issue as he walked 20 total hitters and hit 8 in that same season.

Looking to rebound in 2014, Logan started off the season at Low-A Greensboro where his struggles continued out of the pen – recording a 5.42 FIP in 13.1 innings pitched before he was promoted to High-A Jupiter. This promotion seems to have rejuvenated his minor league career – Logan was finally able to find his footing out of the pen. His stint with the Hammerheads was outstanding, as he out pitched his 3.45 ERA, registering a FIP of 2.51 and 41 strike outs in 44.1 innings pitched while only walking nine. These statistics warranted the end of year promotion to Double-A Jacksonville, where the buff right handed hurler managed to dominate the opposition. Armed with a knee painting mid-90’s fastball, mop-up slider and above-average change-up, Logan out pitched his 1.73 FIP by posting a 0.00 ERA with one walk and a .636 WHIP after facing 40 hitters over 11 innings. This was the icing on the cake to a great 2014 campaign for Blake Logan – moving through three levels of the Marlins farm system, while placing himself on the fast track to the big leagues with the kind of impressive stats listed below:

Logan has started this season with Double-A Jacksonville and has looked to continue the same kind of success seen from him in 2014. Unfortunately though, up to this point, Logan has post a 4.82 FIP and has given up 2 home runs in six appearances. This stat should drop as he receives more seasoning at the Double-A level, making him a top candidate to watch out of the bullpen in the Marlins’ minor league system this season.

Acquired by the Miami Marlins this off-season in a trade for Casey McGehee from the San Francisco Giants, the 6’2″ 170 lbs. string bean Castillo brings the same kind of electric arm as trade mate prospect Kendry Flores. With a Fastball that sits in the mid-90’s, Castillo put himself on the map with the Giants rookie ball affiliate in 2013, recording 20 saves in 27 appearances with a 1.12 FIP and 34 strikeouts. He kept hitter’s bats at bay- posting a .221 BABIP and 3 walks after facing 106 batters at the end of his 2013 campaign. All this just 2 years after signing a free agent contract with the Giants out of Bani, Peravia, Dominican Republic.

After his 2013 performance, Castillo was promoted to Low-A Augusta in the Giants farm system – where he flashed signs of becoming a shutdown closer in the big leagues, posting a 2-2 record with 10.13 strike outs per nine innings pitched, and a FIP of 4.00 over 58.2 innings pitched – as shown in his statistics below:

At the age of 22, Castillo still has a lot of seasoning ahead of him before making the leap to the Marlins major league pen. So far though, the Marlins front office like what they see from this potential future closer. The hope is that he will continue to add body mass and durability to his wiry frame. Castillo is off to a good start this season at Low-A Greensboro. He has collected 2 saves in 8 appearances while striking out 15 over 13.1 innings pitched, as well as flashing his advanced control walking .66% per nine innings pitched – which is down from his 3.84% in 2014.

If Luis Castillo can continue to make improvements as he moves up the ranks of the Marlins minor league system, the 22-year old righty could find himself on the fast track to the Marlins big league roster if we continue to see veterans and four-A call-ups struggle.

Other notable relievers to watch: 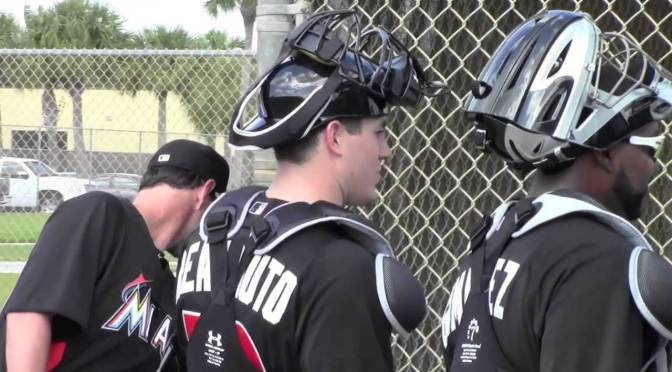 Yes, it’s true – Baseball Prospectus and the rest of Major League Baseball have dubbed the Miami Marlins the second to last minor league system in the big leagues. But are they wrong? The Marlins did trade away their 2013 first round draft pick (fifth overall) in Colin Moran midway through the season last year to the Houston Astros for players named Jarred Cosart and Kike Hernandez – who has since been traded away again this off-season. Hernandez wasn’t the only youngster on the move though, as the Marlins continued to back up the moving truck, sending top pitching prospects Andrew Heaney to the Los Angeles Dodgers and righty Anthony Delscalfani to the Cincinnati Reds. The Marlins received just one high-ceiling prospect in return, major league doormat-ready reliever Kendry Flores from the Giants. If you combine those roster moves with the loss of mid-level catching prospects Austin Barnes and Chad Wallach, and then look at the Marlins aggressive approach to making minor league promotions, it’s easy to see why Baseball Prospectus and the baseball world in general see the Miami Marlins weak on the farm.

Given that everything I stated above is true, and you find yourself sitting there wondering what I’m going to say next, don’t be concerned. It’s my mission to doubt the doubters and dive deep into the Marlins organizational depth charts, in hopes of proving the nay-sayers wrong by finding hidden gems.

This week I will be diving into the Marlins depth at the catcher position. We already know that Salty will start behind the dish for the Marlins and Mathis will back him up while touted Marlins top prospect J.T Realmuto will play the waiting game.  So let’s look at the best of the rest, because three catchers do not constitute a franchise.

Call me crazy, but I really like what Arturo brings to the Marlins organization. After signing a minor league contract this off-season, this 6’0″ 235 lbs. Monterrey, Nueva Leon, Mexico native has the build and the bat to make an impact this season. At age 23, he is a long shot to raise through the Marlins prospect ranks, but he put up solid enough contact and power numbers in 2014 with the Toros de Tijuana and Sultanes de Monterrey teams of the Triple-A Mexican League to be ranked above Miami Marlins 2014 first-round CBA pick Blake Anderson.

In the 93 games played in the Mexican League, Arturo started 62 games behind the plate – throwing out forty percent of runners attempting to steal on his arm. He also had 15 starts at first base with a perfect fielding percentage. Not only does his bat show promise, so does his defensive abilities. This makes Arturo Rodriguez a strong candidate to watch in the Marlins minor league system this season.

As mentioned in the Arturo summary, Anderson was the 36th overall pick drafted in the first-round CBA by the Miami Marlins out of West Lauderdale HS in Collinsville, Mississippi. Fresh off his 19thbirthday Anderson will look to improve his numbers from his first taste of pro ball.

Looking at his first year statistics at the plate it’s easy to see what scouts already know: he was drafted for his 6’4″ tall frame, an absolute hose for an arm, and his strong glove hand framing pitches. We all know the fast track to the big leagues for prospect catchers is based on their defensive ability, and Anderson has plenty of ability. The thing to watch though this season will be the comfort and improvement Anderson shows as he handles the bat at the plate. As his body matures and produces more power in his bat we might just have a Baltimore Orioles Matt Wieters comparable player down the line.

Brad is a 6’3″ 215 lbs. right-handed swinging 18th round draft pick of the Miami Marlins and the only catchers besides Chris Hoo selected in the 2014 Amateur Draft to have collegiate experience. He played for San Diego State University and this should give him a leg up on the rest of his competition. After crushing the ball his first 30 games for the Batavia Muckdogs, he was quickly promoted up to Low-A Greensboro to end the season splitting time with another 2014 draft selection in catcher Chris Hoo. Take a look in at his stats from 2014:

It’s easy to see why Haynal could easily become a hidden gem for the Marlins. Even if he can’t hide behind his tall frame, Haynal offers advanced defensive abilities behind the plate that no one else in his draft class came in with, with the possible exception of Blake Anderson. It’s Haynals bat though that will carry him up the ranks. Already 23 years-old, he needs to  accelerate his time frame to make adjustments at the minor league level if he hopes to crack the big league roster one day. He is defintely another solid candidate to watch out for this season.

Other Notable Catcher to Watch