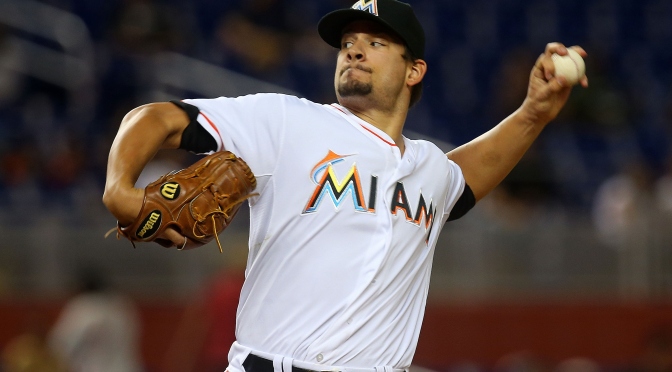 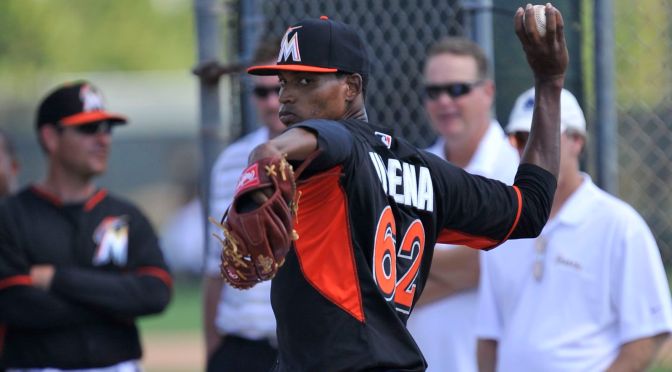 Rising to the occasion in 2014 while playing for Double-A Jacksonville Suns, Jose Urena came out guns blazing – something we have become accustomed to seeing the Bani, Dominican Republic native do since joining the Miami Marlins organization in 2009. Urena is not only highlighted for being ranked on the Marlins top ten prospects lists, but is notable for his high-powered right-arm that features a fastball touching a maximum effort velocity of 98 mph. This same arm regularly sits on auto pilot at around 92-95 mph. The advanced feel for and  dominant control of this fastball, marked his path to being capped a 2014 Mid-Season All-Star –  recording a 6.8 K/9 ratio and 3.42 FIP (Fielding Independent Pitching) while walking just 29 hitters in 162 innings pitched. Urena averaged six innings a start and went seven strong on 10 occasions over 25 starts this past season.

Showcasing his electric fastball with a loose sling-shot type arm-action is, of course, the bread and butter of Urena’s whole arsenal, allowing his other off-speed pitches to play up. His best secondary offering is the change-up, which he tends to throw at an above-average capacity more consistently than his slider and curveball. Although the slider can be effective as another out pitch for Urena, it tends to be thrown below-average more often than not. His curveball is more of a “show-me” curveball that is scarcely used as a developmental 4th pitch at this time.

Unfortunately, the Marlins are already heavily stocked with right-handed arms, especially once we see the return of rookie sensation Jose Fernandez. Jose Urena’s path to making his big league debut in 2015 will not be an easy one, unless there are unforeseen injuries to the Marlins staff. This assumes of course that the Miami Marlins front office view Urena’s prospect value higher than that of his right-handed counterpart, Trevor Williams. Williams pitched for the High-A Jupiter Hammerheads in 2014. He pitched only 15 innings at the Double-A level last season and tallied a 1.87 WHIP and a .368 BABIP, but he also posted a noble 3.17 FIP with a 6.87 K/9 ratio in 129 innings with the Hammerheads.

If the theory behind the reliever idea holds true, then there is a chance you could see Jose Urena go lights out in early spring minor league performances and make the Marlins big league pen as a reliever by mid-season. If that theory doesn’t entice you, then reality looks for him to open the season as a starter at Triple-A New Orleans, or possibly at Double-A Jacksonville for some extra polishing – a move the Marlins organization is prone to making to protect their top prospect pitchers. Hoping that with some extra seasoning at the minor league level, Urena can make an impact later on in the season as a September call-up, hopefully slotting in the big league rotation as either a spot starter or long reliever.

With everything considered, Jose Urena will be an exciting prospect to follow in 2015. 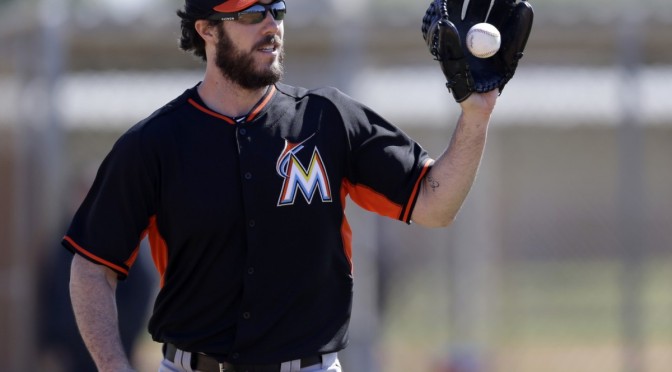 Assuming the Marlins don’t shop the recently committed Dan Haren before the season starts, the battle for the 5th spot in the Miami Marlins rotation just got exciting in the form of unpredictable.

After showing up at camp on Friday in Jupiter, FL to report for the Marlins pitchers and catchers workout, Dan Haren has made it clear he is here to stay, only fueling the fire with regards to the internal battle to find a 5th starter for the 2015 Marlins opening day rotation. Now that he has voiced his commitment to the team, Dan Haren may not be the one who’s caught up battling for the last spot in the rotation. Rather the battle for the last spot now could come down to watching the kind of numbers Brad Hand, Tom Koehler and David Phelps can put up, in hopes of solidifying the last spot in the rotation. We can assume that Dan Haren will now slide into the 4th spot in the rotation, barring any kind of injury, the Marlins are unlikely to send a much needed savvy veteran down to Triple-A or take his “Man-Card” from him by making him a long reliever, instead of the consistent work horse he has always been. Significance being, that there will be a new internal battle for the 5th spotin the rotation that will take place between Tom Koehler, David Phelps and the only lefty in the bunch Brad Hand.

Koehler is the lead horse in the race for the 5th spot going into the spring. Based on his stat line from last year where he registered a win-loss record of 10-10, while recording a career high in IP (191.1), ERA (3.81) and K/9 (7.20) striking out 153 total batters. All the while, walking just 3.35 batters per nine innings pitched. Although he tends to wear down in the late innings proven last year by Koehler going 7 strong innings just 9 times over 32 games started. However, he did end the season with 17 quality starts out of those 32 games, where he went six or seven innings for the Marlins and gave up just 3 runs or less on those occasions. Meaning, if he can come into the spring with an improved fatigue rate and a better feel for his arsenal of pitches than there will be no questions asked about who will land the 5th spot in the rotation.

Even though Hand doesn’t have the strongest starting resume when compared to the likes of Tom Koehler and David Phelps, he made a case to be looked at this spring by the Marlins organization based on the numbers he was able to put up after returning to an injury riddled Marlins rotation in July of last season. Making just 14 starts done the stretch, 8 of which were quality starts and compiling a 3.80 ERA, while striking out a total of 43 batters in just 83 innings pitched after being recalled from Triple-A New Orleans. Giving him a 4.66 K/9 ratio, but its his .323 BABIP over those 83 innings that is cause for concern going into spring training, proving that he still hasn’t developed a consistent put away pitch at the major league level. Thus, instead of heading into the spring with a solidified spot in the Marlins rotation, Hand will have to prove he has developed an advanced feel for his off-speed offerings to keep hitters at the major league level at bay, if he wants to land that back-end 5th spot in the Marlins Big league rotation.

I think by all accounts it’s safe to assume that Phelps will either start the season at Triple-A New Orleans as a starting pitcher or will end up falling into the same profession as he did with the Yankees. Meaning, if he makes the major league roster out of spring, it will likely be as a long reliever with the chance of receiving spot starts here and there as needed. He will, like the others get a chance though at the starting spot based on what he was able to accomplish in his 17 starts last season for the New York Yankees. Only winning 5 decisions of those 17 starts, but posted a 4.28 ERA with a 6.80 K/9 ratio in his 96.2 innings pitched when he toed the rubber as a starter for the Yankees. For Phelps to come out of spring training as the 5th starter in the marlins he will need to show complete control in his repertoire of pitches and come out with an improved mound presence translating to dominance on the mound that will hopefully cast shadows upon Brad Hand and Tom Koehler, allowing Phelps a true chance to complete for the last spot in the rotation.

With everyone final factored into the equation, and assuming the rotation is already preset with Mat Latos, Henderson Alvarez , Jarrod Cosart, and possibly Dan Haren (in no particular order) these final three pitchers listed above will have their work cut out for them when spring training games beginning next month. So make sure to pay extra attention to the screen when these pitchers take the mound for the Marlins, as they will be bringing their best stuff in hopes of earning that final spot in the rotation. 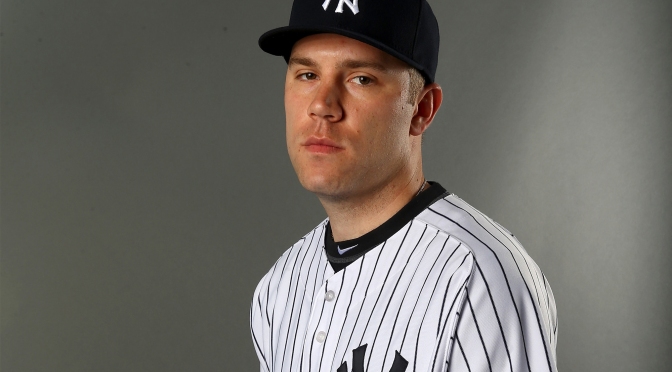 When David Phelps sat down with the Miami Marlins Front Office last month, he was asking for a 1 year deal that would pay him around $2 million for the season.

A deal of that magnitude was never considered by the Marlins organization, sending Phelps to his Arbitration Hearing, where again he came out a loser. Phelps requested $1.875 million from the arbiter hearing his case, but was quickly denied his number and forced to settle for a 1-year deal worth $1.4 million.

Time will tell if Phelps is actually worth the 1.875 million is was asking for, as he will start this season battling for the 5th spot in the Marlins opening day rotation. More than likely he will end up as a long reliever, with the occasional spot start here and there based on how he does coming out of the pen in 2015.

Will Nathan Eovaldi be missed as a FISH? Or will he be one that is happily relinquished to another? This is a guy that stands at 6’2″ and 215 lbs. spitting straight fire from his right arm registering upwards of around 97-99. That’s enough to get anyone hyped up about buying a ticket on the Eovaldi express. However, after last season and playing the role of Ms. Cleo looking into the future, you won’t find me standing in line to join that ride. Despite his unbelievable arm strength and ability to throw with max effort for 6 innings (if he makes it that long) he lacks something big league analysts like to call “pitch ability”. You know, that one tool needed to not just make your pitches dominant, but unhittable.

Through 2014 we saw a lot of “flatability” in this guy. Meaning you saw a guy take the mound whipping up his best combination of velocity and movement, but ending up with pitches being put on a platter. Because without that tool called “pitchability” this is what we get. A guy, who even with an above average FIP rating of 3.37 in 2014 he had a jacked up BABIP that stood at .323, strung together with a K% that declined from 2013 from 17.3 to 16.6 in 2014. I know what you’re thinking, 97-99 MPH, hard off-speed and these are the numbers we are looking at? All of these numbers reflect the unwanted tool in a pitchers arsenal, “flatability”.

Those of us who watched Nathan pitch this season would be remiss if we called it anything else. Don’t get me wrong he was great through 3 innings and even on most occasions getting us through 6 strong , but you would be inattentive if you didn’t see how many times that upper 90’s fastball looked like a beach ball, even on a 6″ monitor, causing his HR/FB ratio to raise up to 6.6%. Add to it his slider that was hung like the Hit-A-Way tool to hitters and belted some 400 feet into orbit and he ends up with a disastrous WAR rating of 0.7 for the 2014 season. Showing continuous signs of a lack of “pitchability”, not being able to put hitters away.

Everything being equal, Nathan valiantly served a depleted Marlins rotation that started 13 different pitchers in the 2014 season. He was a guaranteed starter who totaled around 200 innings. Will he be missed? Yes, for his durability and pure fact that his roster replacement could end up being another gopher ball pitcher in Dan Haren, who carries in a HR/FB ratio of 11.9%.Leaving you to debate the real question. Are we happy to have him relinquished to another team? We will just have to wait and see what the 2015 seasons brings. But if Nathan toes the rubber strutting “pitchability” over “flatability” then it could be lights out for opponents in the AL East.