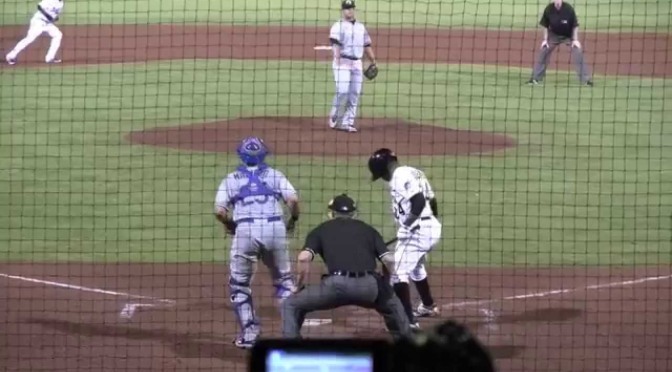 Where do you rank a Jekyll and Hyde prospect like Colby Suggs? As Jekyll, Suggs is able to strut the pose and dominance that generated his “Bulldog” nickname. Lighting up scout’s guns with his 91-94 MPH fastballs, he also made some of the minor league’s best look ugly with what should be considered one of the best 12-6 hammers in the Marlins organization. As Hyde, Suggs has a tendency to allow his pitches to run wild on their way to the plate as he attacks the zone with a bull in the china shop mentality. Handing out walks at an alarming rate in 2014, he creates this mind boggling dilemma for the Marlins – as much as they want Jekyll night in and night out in 2015, have they seen the end of Hyde?

With a collegiate background as Jekyll, Suggs dominated in his time at the University of Arkansas, never finishing a season with an ERA higher than 1.74. He earned his “Bulldog” nickname by continually boosting his career stat line as a Razorback, finishing with a 1.36 ERA to go along with 53 walks and 65 strikeouts in a total of 79.2 innings pitched over three seasons. This gave the Marlins strong reasons to select him with their 2nd round, supplemental 73rd overall pick in the 2013 Amateur draft.  After all, what’s not to like when you can have a right-hand reliever whose physical attributes place him around 6’0″ in spikes and 235 lbs. strong on the mound? This physicality, combined with his show time curveball, contributed to MLB.com experts ranking him as the Miami Marlins Organizational #10 prospect in 2014. Unfortunately, Colby Suggs scouted talent is yet to catch up with his hype at this point. With a year and a half of seasoning behind him, Suggs has struggled to contain the presence of Hyde when he toes the rubber down on the farm – a presence that is undeniable when diving into his minor league resume.

As dominant as Suggs was in college, his struggles were real. As the team’s shutdown closer, he lead the Arkansas staff with 7.4 walks per nine innings pitched in 20 2/3 innings his senior season. This is the same unimproved statistical skid mark that is present in his game today. Let’s look at his stats from his first full professional season with the High-A Jupiter Hammerheads where mound presence continued to plague him night in and night out:  25 walks, six wild pitches and seven hit batsmen while pitching 58 1/3 innings in 46 appearances. He showed the same erratic tendencies on the mound that he showed in 2013 after signing with the Marlins and being promoted to High-A where he allowed 14 free passes in 18 1/3 innings, facing a total of 79 batters out of the pen.

As I have alluded to above, with Suggs there has always been two sides to his story. His Jekyll like moments on the mound have highlighted his ability to have master control of his devastating curveball making him a force to be reckoned with, especially when paired with his above-average fastball. These moments contributed to his 47 strikeouts last season and the 45 strikeouts he piled up in 2013 in just 39 innings pitched. Although he mustered a 2014 FIP of 4.09 and subpar strikeout-walk rate of 1.88, his Jekyll like appearances have cast a big enough shadow over other pitching prospects. He remains one of the Marlins top pitching prospects and a player to be watched heading into the 2015 season.

Assuming pitching coaches Joe Coleman at High-A Jupiter and Derek Botelho at Double-A Jacksonville can continue to tweak Colby’s mechanics, we hope to see the end of his Jekyll and Hyde ways. This will jettison the struggles with his command that we have seen up to this point, placing him back on the fast track to becoming a possible September call-up in 2015.

*Note: Please check out the article written by Jason Tate in its original form at http://www.fishstripes.com/2015/3/12/8196519/miami-marlins-prospect-colby-suggs